Mosaic and pottery have always been combined obsessions for me. Having studied archaeology and most specifically Roman mosaic at university, worked in mosaic restoration and then returned to pots, it occurred to me that I could make my own clay tesserae and mosaics. So these are made from clay which I have mixed with various colouring oxides, rolled out, burnished, cut and then fired. This process produces quite muted colours which suit me as I prefer the subtle tones of Roman mosaics to later jagged and brightly coloured ones. I also follow the Roman preference for rectangular tesserae which help the eye to move calmly over the mosaics.

I draw the designs on brown paper and stick the tesserae on upside down, then when the design is complete they are concreted within a metal ring, turned over, cleaned and then grouted. The subjects reflect what I see in the English countryside with a nod to the Romans in some of the borders. Most of the mosaics are around one metre in diameter.

The finished mosaics are very sturdy. They can be set in the floor or used as table tops or wall panels, but like their Roman antecedents, they are not frostproof if left flat - if they are to remain outside they should either be dry and covered in winter, or moved to a vertical position. 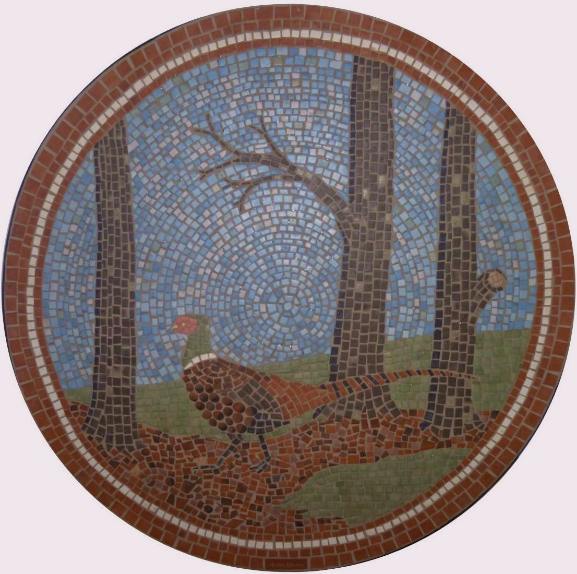